We Were Going To Have A Social Media Day Event But We Had A Fire Instead.

When I heard about Mashable Social Media Day, a global event held locally, I got excited.

As an internet marketing professional that also has over 15 years of event planning experience I thought, “I’ve got this!  Fort Collins is gonna have a fabulous Social Media Day.”

Fort Collins is a wonderful community. You may have heard of us. Nestled against the foothills of the Rocky Mountains, annually we’re ranked by publications such as Money, Forbes and News Week for our quality of life, business, education and recreation. The Poudre Canyon is designated as a wild and scenic byway. We are very active in green technology and a mecca of microbreweries. Home to one of the top rated Veterinary schools in the country and Colorado State University, we’re also a key community in the technology sector and simply a wonderful place to live, work and play. I invite you to visit our beautiful community.

Social Media and digital communication are top of mind and agenda for most businesses and organizations in Fort Collins.  My goal for Social Media Day was to connect the community. That’s a big order but I envisioned government, education and non-profits gathered in a high visibility location, meeting and connecting with Fort Collins folk.  People could sign up for electronic utility billing, connect with their kid’s neighborhood school and volunteer with agencies serving the community. This had epic possibility.

I began with a Twitter profile, created an event on Facebook and populated the Mashable Social Media Day Meet Up page. I researched and connected with hundreds of local peeps on Twitter and began asking others to jump in on the event. This was going to take people power.

My next mission; Venue. Luck was with me. It seemed that, sandwiched between our epic Colorado Brewer’s Festival and Fourth of July, my date was an island of calm.  I began the process of securing the highest visibility location in my community.

On to the City for a proclamation declaring June 30, 2012 Social Media Day in Fort Collins and  getting on the community calendar.  Having a bit of experience in government in Fort Collins, I knew where to start.

Through connections made on Twitter, a committee was formed  to organize the event. With the support of local marketing professionals as well as The Coloradoan, our newspaper, things were rolling nicely.  Old Town Square was secured as our event venue and I began connecting with organizations and attending networking events.

June 9, 2012 is a day that will live long in the collective memory of my community. It was a beautiful late spring Saturday in Fort Collins; The Taste of Fort Collins weekend, a day that held festive promise. I was up early and at my desk. Having gotten fairly active with the local community on the Twitter, it wasn’t long before I was aware that crisis was building just west of us. The High Park Fire had begun.

The terrain is rugged in this beautiful mountainous plat.  A great deal of the area affected by the fire falls under the purview of rural volunteer fire protection districts. That means first responders are residents. The initial report came in about 6am and by 9am the first water drop was made. Every responder in northern Colorado was on scene, and the fire grew.

I began tweeting news and information about the fire. I established a Facebook page to post moral support and fundraising opportunities. High Park Fire was growing in epic magnitude, as was the online traffic. Hundreds were being evacuated along with pets and livestock. Homes were being threatened and burned. Our local firefighters and sheriff’s department were up to their eyeballs in emergency response. Before the end of the day Saturday, the Governor had declared the High Park Fire a Level One Emergency. Begun from a lightening strike, 20 acres the early morning of June 9 grew to over 20,000 acres in less than 24 hours and still the High Park Fire grew.

According to an article in the Denver Post; “The #highparkfire Twitter search (known as a “hashtag”) peaked on June 9 (the day it started) at more than 10,000 tweets, with several thousand daily tweets since, said Elaine Filadelfo of Twitter communications.”

On Sunday, west of Fort Collins, clearly, disaster ensued. The weather amplified fire conditions. Severe drought coupled with thousands of beetle kill affected trees melded into the perfect storm. All points west from Horsetooth Reservoir to our beautiful Poudre Canyon, places I love and have played in for years were being reduced to ash with no containment in sight. This fire was out of control.

Over the course of the last three weeks I have been almost constantly online, tweeting and posting about the High Park Fire. I’ve seen this insidious beast burn over 87,000 acres, over 250 homes and impact thousands of residents and animals. Volunteer fire fighters protected others’ property while their own homes burned. A woman that loved those mountains was lost. The impact of this fire will be with us for years to some.

The Facebook page has become a feel good space. Residents and businesses all over town are displaying Thank You signs in support of the fire fighters and emergency responders. I’ve been posting the pictures of our collective gratitude, fundraising events and the pieces of this that make us feel good about all this tragedy. 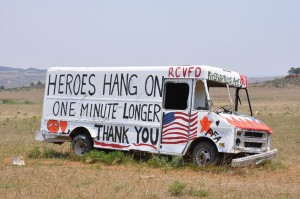 photo credit North Forty NewsI’m using social channels to show our community support for the heroic firefighters and emergency responders too. The area is awash in Thank You Signs expressing appreciation. Many are posted on the Facebook page. I’ve shared dozens of tweets of encouragement to those risking their lives on our behalf.

Talk about learning the power of Twitter! I have connected broadly with locals, news organizations and a whole group of “crisis tweeters”. These people are worldwide; Organizations like Humanity Road whose volunteer members help disseminate information when disaster strikes. I am in awe of their efforts.

Many of the very organizations and entities I had planned on being a part of Social Media Day have been working literally 24/7 supporting evacuees and fire fighting teams. Given that, Social Media Day FoCo just seems unimportant when compared to the many needs of my community.

Rather than holding our event, I have asked sponsors to donate to High Park Fire relief and attendees to volunteer on Saturday at the Help Colorado Now center at Foothills Mall.

Help Colorado Now is the conduit of all charitable resources deployed for the High Park Fire and all Colorado fire relief. I had the pleasure of meeting them this week. Actually an organization of the Adventists, they are volunteers responding to disaster where it strikes; Individuals from across the country that have come here simply to support. I am humbled by their heartfelt work.

Help Colorado Now is currently accepting cash and in-kind donations. They are also a distribution center serving the many needs of those affected by the fire. If you have need, please, see them at Foothills Mall. They will help. It will do my heart good to work with them on Saturday.

Having lived here for over 30 years, I know very well what a great place Fort Collins is. Good has come out of this horrific disaster. The love, respect and spirit of support within my community has grown even deeper. When the going gets tough, we hang together. Proud to live in FoCo. 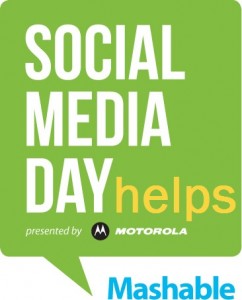